Hooks, hook blocks and other safety-critical components can be tested theoretically and physically. In more detail this can be theoretically via calculation on paper, or by computer with finite element modelling and analysis, or by physically testing a component ‘in the metal’.

Preparing a hook for testing in the new 1.500 tonne capacity machine at Forjas Irizar.

According to these standards (DIN/BS/ASTM), tensile strength is marked 1:4.5 and the minimum yield stress marked by standards is 1:2.7: that means, that at 2.7 times the allowed load, the most important component in the hook block – the hook – would begin to deform and then could break at 4.5 times the maximum allowed load.

Other values can be obtained by applying finite element modelling standards to determine the fatigue strength of the critical parts of a component such as a hook block but they are still theoretical calculations. To be reliable, physical overload tests must be carried out: that is, to subject the component to traction under a controlled load higher than the safe working load. For such calculation there are formulas but the one that Forjas Irizar applies is according to its own PC10.4 procedure:

For example, when a 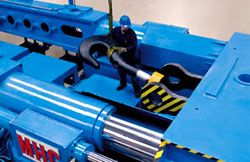 In this way, in the worst case scenario, components tested to twice the SWL never reach their yield stress since the minimum safety factor is 1:2.7.

Test of a hook for use in the nuclear industry.

In addition to DIN/BS/ASTM standards, Forjas Irizar recommends considering the influence of other important technical characteristics that must be taken into account, especially in heavy duty applications, such as steel works.

Once the hook is in use, it should get special attention regarding its material properties in relation to the effects of corrosion, fatigue, erosion and wear.

Fatigue is the subject of this article, since corrosion and erosion are covered in International Standards and corrosion from the action of seawater would be the subject of a separate article.

How should fatigue, which can be described as the cholesterol of lifting parts, be checked? Fatigue is the number one factor to have under control. It reveals itself when materials are submitted to repetitive traction cycles and it can cause catastrophic failure in a component such as a lifting hook.

Fatigue that can cause a hook to break presents itself in two well-defined areas; one is on the outside in the form of crack initiation and first succession. The second is internal, by a sudden break in a weak section.

Causes of breakage by fatigue can be, for example, accumulated energy in the material as a consequence of the elastic hysteresis to which it is exposed during each lifting and lowering cycle.

Phase A During the hook’s first lifting and lowering cycles (about 5% of the total) some fibre-band orientations start internally, in the grain of the steel. At the same time, on the outside surface of the piece, crests and valleys (extrusions and intrusions) appear.

Phase B After more cycles (about 25% of the total) the first inter-band cracks appear inside in the grain of the steel. At the same time, surface intrusion and extrusion becomes more and deeper.

Phase C As the number of cycles advances (up to 75 % of the total), superficial extrusions grow, becoming cracks that deepen inside at the same time that inter-band cracks increase in quantity and magnitude.

Phase D During the final cycles, as a consequence of not taking preventive action in the earlier phases, the component breaks in the area that has been weakened by fatigue.

A crucial consideration is the “incision effect”. This effect is produced as a result of the geometrical form (or other reasons) causing stress concentration areas or points in the component. Examples include surface damage in the form of notches, and design or manufacturing flaws, where there are sharp corners without a large enough or smooth radius of material.

Where there is any doubt about the status of lifting components they should be checked. This kind of preventive action saves lives. In light of the serious consequences of negligence in checking or inspecting hooks during Phases B and C, above, Forjas Irizar recommends that periodic overload tests under controlled conditions are carried out.

There are some standards, norms and regulations where it is indicated that overload tests should be done at least once a year, or earlier, depending on the number of cycles. In addition, it is recommended that the overload test is applied not only to the main component (the hook) but also to all the parts that constitute the complete hook-block; hook, nut, crosshead, shafts, bearing, sheaves, ropes, etc. Any parts that fail under a controlled overload test in a test rig while the component is off the crane have minimal consequences compared with the potential disaster of their failure when in use on a crane with a load suspended on the hook.